Looking to add new features to your old Mac? The Mac ROM-inator II Atom replaces the stock Macintosh ROM SIMM with a 2 MB custom flash memory module. Once installed, the flash ROM takes over the Macintosh, allowing for a bootable ROM disk and other new possibilities.

The ROM-inator II Atom is fully assembled - just plug it in and run. It comes pre-programmed with a custom ROM image with the following changes as defaults:

The ROM-inator II is based on Doug Brown's original Mac ROM SIMM design, used with permission.

The ROM SIMM and pre-programmed ROM image are compatible with the Macintosh SE/30, IIx, IIcx, IIci, IIfx, and IIsi.

CPU accelerators such as the Daystar PowerCache and Turbo series are not compatible with the ROM-inator II.

Some SE/30 hardware may require a shim to ensure ideal fit of the SIMM – see instructions for details.

If running Mac OS System 7.5 or later, some Mac models require a software patch to the System file.

A nice benefit of the pre-programmed ROM image is to add built-in support for HD20-type hard disks, such as the HD20 hard disk emulation mode of the BMOW Floppy Emu. The Macintosh SE/30, IIx, IIcx, and IIfx lack HD20 support in their stock ROMs, so this replacement ROM enables those machines to use HD20 disks.

The pre-programmed ROM image also makes the Mac 32-bit clean, enabling it to use more than 8MB of RAM natively without the need for special system enablers or extensions. Some older Macintosh models like the SE/30, IIx, and IIcx have stock ROMs that are "dirty", meaning they can't support 32-bit addressing without ROM patches. Using the Mac ROM-inator II and the pre-programmed ROM image, the Mac SE/30 can support up to 128MB of RAM! 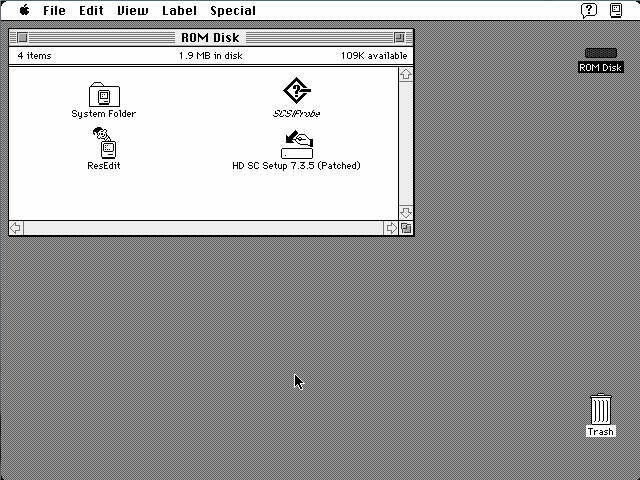 The built-in ROM disk is like a recovery partition for your Macintosh, containing System 7.1 and a collection of disk utility programs. With the ROM disk it's possible to boot a computer with an unformatted or damaged hard disk, and then format or repair it using the utility programs. Or boot a computer with no physical disks at all, to perform troubleshooting and diagnostics.

The ROM disk image is stored compressed in the module's flash memory, and is decompressed on the fly as needed, in order to squeeze the largest possible disk image into the available space. This requires an additional 1 MB of RAM for caching of decompressed disk sectors. The ROM disk can be mounted as read-only, or as a read-write RAM disk.

With the Doug Brown SIMM programmer or other SIMM programming hardware, the Mac ROM-inator II Atom's flash memory can be reprogrammed, providing the ultimate in customization. There's 2 MB of total flash memory, of which 1.5 MB is available for any purpose like a new ROM disk image, alternate ROM code, or other crazy experiments. Using compression, this is enough for the base 512K ROM image plus a roughly 2.2 MB uncompressed disk image. Or fill the whole space with a collection of different base ROMs, selected from a startup menu. Go nuts!